Spiritrials – Night One of the Get Down 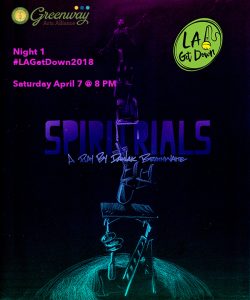 In Spiritrials, addiction, religion, and the law intersect in a court-ordered drug rehabilitation program.  A timely exploration of the American criminal justice system, this multi-dimensional play blurs the line between hip-hop and dramatic performance.  Dahlak Brathwaite (writer/performer) weaves through the autobiographical and the fictional, music and monologue, to examine his place in what appears to be a cultural rite of passage for a young Black male.

Dahlak is a multi-faceted hip-hop artist that maximizes his abilities as musician, actor, poet, and educator within the transformational space of the theatre. Since launching onto the national spoken word scene by appearing on the last two seasons of HBO’s Russell Simmons’ presents Def Poetry Jam, Dahlak has showcased his seamless blend of hip-hop, theatre, and spoken word at over 200 universities throughout the United States and Europe.  Dahlak has worked closely with Broadway veteran and Rockefeller fellow, Marc Bamuthi Joseph.  Dahlak has written and performed in several of Joseph’s critically acclaimed plays, including Word Becomes Flesh – presented at The Public Theater and The Lincoln Center.  From 2007 to 2012, Dahlak has released five musical projects, which includes the album Spiritrials that served as a soundtrack to his solo play.    In 2014, Dahlak was selected as a musician for a U.S. State Department International Exchange Fellowship called 1Beat.  Spiritrials, the solo play written, performed and scored by Dahlak, is currently on tour.  Since the premiere in 2015, Spiritrials has been performed in 15 cities around the country, including two notable presentations at the prestigious Kennedy Center.  Currently, Dahlak is collaborating with director Roberta Uno in order to adapt Spiritrials into an ensemble musical. Development of the work has been supported by the Oregon Shakespeare Festival and is being supported by California Institute of the Arts (CalArts) through a series of residencies.  Dahlak earned his B.A. degree from the University of California, Davis, where he studied English and Dramatic Studies.

Back to the Get Down